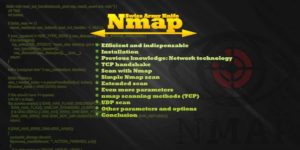 1. A Swiss army knife
Not for nothing is Nmap referred to as the »Swiss Army Knife« among the port scanners among administrators, security researchers, and IT geeks. The tool has been developed since 1997 and serves as a tool for finding open ports/network services of a system.
In addition to pure port scanning, the Open Source Tool ( GNU License ) can do even more. Among other things, Nmap can use  OS fingerprinting to recognize the operating system used on the destination host or to identify all active hosts in a network via mapping.
In this article, I would like to give you a brief look at Nmap and show you how you can check your (server) system for open ports. However, the tool is very comprehensive and powerful, which is why I will only go into a few basic functions.

2. Nmap: Efficient and indispensable
Originally, Nmap was developed for GNU / Linux and is purely text-based. However, there is also a graphical version ( Zenmap ) for those who do not like working with the terminal.
2.1 Windows or Linux / macOS

Nmap is not only available for GNU / Linux, but also for Windows and macOS. However, the use of Nmap under Windows is associated with a few limitations, which is why Nmap is preferably used on GNU / Linux / Unix systems.

Become an expert with the ultimate Nmap Reference book

3. Previous knowledge: Network technology
When you visit a web page on the Internet, your browser must first connect to the web server where the page is hosted. A web server usually offers its service on port 80 (HTTP) / 443 (HTTPS). Via this service or port (+ IP address), the web server can then be reached by clients and delivers the website via it.
That means quite abstractly: Through a service, systems provide functions that can subsequently be used by other systems. Some of the best-known services on a network / Internet include:

A service is therefore usually assigned a unique port, via which it can then be reached via TCP or UDP protocol. Some services can even be controlled via both protocols. However, there are some differences between the two protocols (TCP / UDP), which should also be considered during the application of Nmap. The essentials in brief:

3.1 TCP handshake
Before the actual data transmission, a connection is first established in the TCP protocol. This process is referred to as a  three-way handshake  (three-way handshake). In simple terms, a client first sends a SYN packet to a server that provides a service on a port. If the port is reachable/open to the client, the server will acknowledge receipt and signal that a connection can be established. The receipt of the SYN packet is thus confirmed by the server sending back a SYN / ACK packet to the client. The receipt of this SYN / ACK packet is acknowledged by the client by sending an ACK packet. The connection between the two systems is now established.

4. Scan with Nmap
Anyone can do a fast scan with Nmap. However, your scans only become meaningful when you adapt Nmap to your target system using appropriate parameters and then correctly interpret the results. By this I mean: The application of Nmap after a little practice is basically not difficult, but the interpretation of the results and what conclusions one draws from it. In this post, I’ll just outline the operation of Nmap and draw your attention to a few peculiarities in the results. More background knowledge and details can be obtained, for example, via the official Nmap commands.
4.1 Simple Nmap scan
To introduce a simple scan without further parameters to an IP address:

Then you often receive the following message:

Host seems down. If it is really up, but blocking our ping probes, try -Pn

The scanned systems are actually online but block the nmap ping requests. So we add the parameter -Pn and disable the ping probe:

As a result, when I scan my web server I get the following output:

4.3 Even more parameters
We add further parameters to get more information out of our target system:
As a result, when I scan my web server I get the following output: 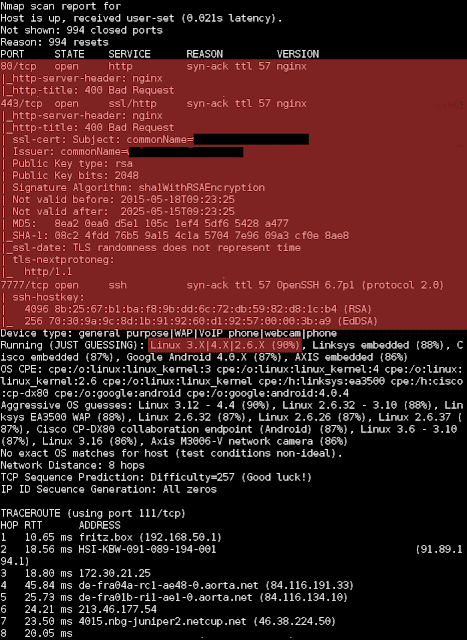 From this result, further findings can be derived: 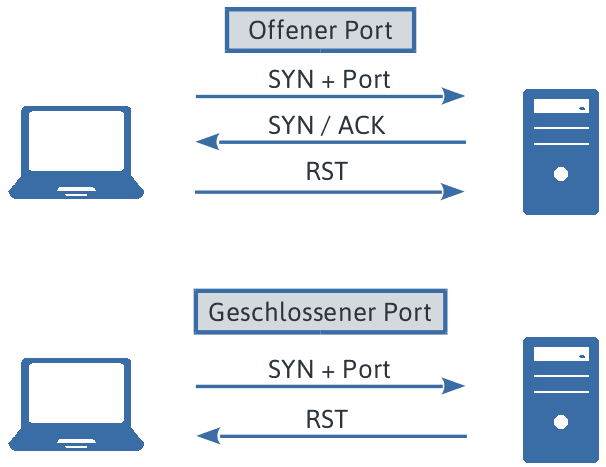 Depending on the destination, it may also be necessary to choose a different scanning method – a good dozen are offered . For example, Nmap itself will fall back on the TCP Connect scan if you do not have administration / sudo privileges – nmap will not be able to create “raw” packets. Compared to the SYN scan, the connect scan is noticeably slower and anything but inconspicuous, as a complete connection to the target system, is initiated. This increases the likelihood that an IDS will strike and artificially slow down the port scan or simply block the requesting IP address. 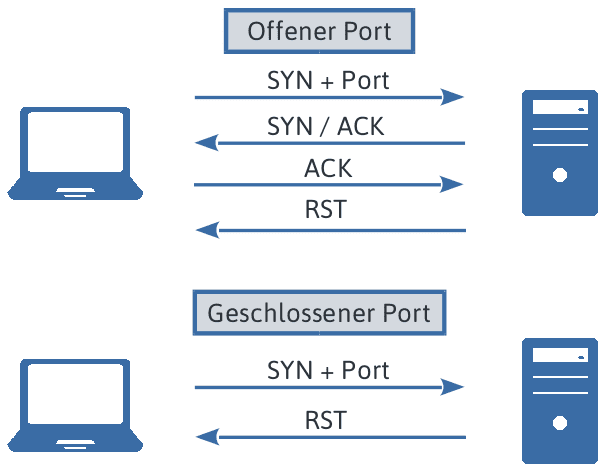 4.5 States of Ports
When nmap identifies a port during the scan, it attempts to classify the state of the port – this is then displayed in the “STATE” column. Overall, nmap knows six different states for ports:

In practice, you will usually find the states open, closed and filtered.
On the web server I have configured iptables so that requests for ports on which no service is offered are answered with a “reject-with tcp-reset”. This means: The web server sends back an RST packet – the remote station now knows that no service is listening on this port. For a nmap scan, it looks like this:

Of the 1000 scanned ports, 997 ports are closed – the reason: Nmap has received TCP RST packets. This would be the default setting for a system or what feedback looks like if no service is listening on a port.
If, on the other hand, a firewall is placed in front of it, the result looks a bit different:

Of the 1000 scanned ports, 997 ports are now filtered in the state – the reason: Nmap has received no TCP RST packets, but no response at all from these ports. The cause is that most firewalls simply discard the request (DROP) and do not send any feedback to the requesting system. If you want to send a reply, you can reject TCP packets under iptables properly:
[info title=”Info message” icon=”info-circle”]# Properly reject all packages
$ IPTABLES -INPUT -p tcp -j REJECT –reject-with tcp-reset
$ IPTABLES -A INPUT -j REJECT –reject-with icmp-port-unreachable[/info] 4.6 UDP scan
Most popular services on the Internet are accessible via the TCP protocol – and yet the UDP protocol should not be forgotten! I have already done some pentests that have resulted in more attack surfaces because my predecessors just did not do a UDP scan. Even services that can only be reached via UDP can be attacked or have a weak spot.
In this post, I will not go into more detail on UDP scans and their peculiarities. It takes a bit of practice and nmap parameters adapted to the target system to produce meaningful results. A short example of a UDP scan with nmap on the FRITZ! Box from outside:

Nmap classifies all ports in the state open | Filtered – so it could not be clearly determined whether the port is open or closed. Open in this example are only ports 500 (IKE) and 4500 (IPSEC) for incoming VPN connections.
4.7 Other parameters and options
In addition to the parameters already presented, nmap offers additional switches and options to adapt the scan to the target system. The man page of nmap is a useful resource since it explains the possible parameters in great detail.
In addition, cheat sheets, as they offer the SANS or other websites are also quite useful.

5. Ports identified – And now?
Especially server systems are a popular attack target because of their constant accessibility. So you are well advised to configure your existing services as securely as possible and deactivate unneeded services. This step reduces the attack surface, which is to be kept as low as possible. Your approach should, therefore, be to only offer those services or ports that are actually needed.

But you always have to be careful when installing new software. In practice, installing software often opens a (network) service or network port on a system. Furthermore, it is also conceivable that the operating system makes such port openings by its standard configuration itself. Critical in this respect are in particular those services that are accessible from the network (and thus often from the Internet) such as, for example, the existing in Windows SMB service .

Whether your system offers a service / port you can check not only via nmap, but also with (in-house) system tools. For this purpose, the tool TCPView is suitable for Windows, for example . On Android you can use the  Net Monitor  . And on GNU / Linux like systems, the terminal will help you via netstat .
List of listening ports or offered network services via netstat:

6. Conclusion
Nmap is an extremely powerful tool and it is hard to imagine the lives of many IT people. If you do a few scans with Nmap, you will get useful results relatively quickly. So, if you host a service on the Internet – be it a web server, email server, or XMPP server – then you should use Nmap to check which services or ports the system offers to the outside.

Professionals work in practice with other parameters, for example, to influence the timing of Nmap so that intrusion detection systems have difficulty detecting a portscan even. This always makes sense if, for example, you perform a pentest for a client and want to be as quiet as possible in the enumeration phase.
also, Check
Nmap commands For Network Administrator